After covering London Black Cabs and New York City Yellow Cabs in the ‘Taxis Around the World’ series, it’s time to travel a bit further and take a deep dive into Bangkok! 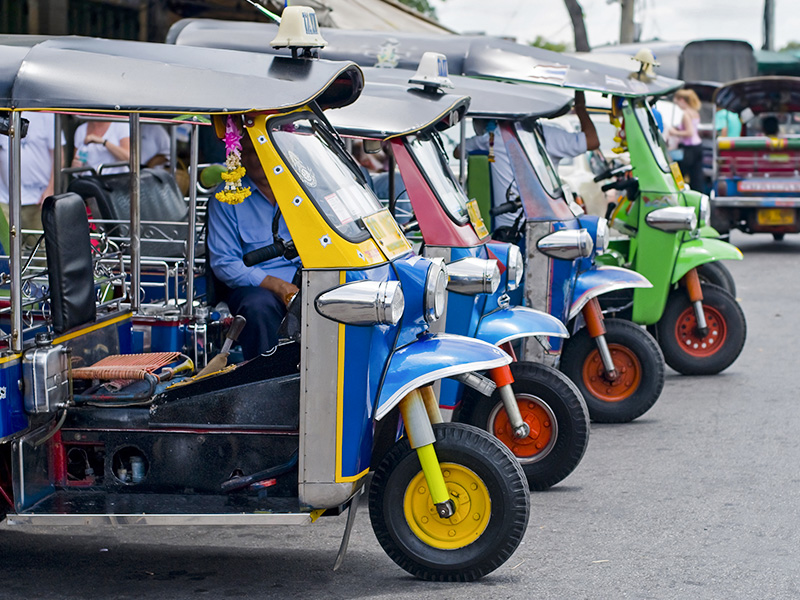 A brief history: Auto rickshaws, or tuk tuks as they are more commonly known, are a motorised version of the traditional pulled or cycle rickshaws that originated in Asia in the 19th century. While common in many countries around the world, particularly in developing countries, Bangkok has become synonymous with this mode of transport in recent years.

Japan are believed to be the first manufacturers of tuk tuks. They began exporting the vehicles to Thailand in the 1930s. The Ministry of Posts and Telecommunications of Japan donated more than 20,000 used tuk tuks to Southeast Asia. Many of these arrived in the ports of Bangkok to soon become taxis!

Cost of a fare: While in previous blog posts in this series we were able to refer to strict guidelines which taxis must abide by, this is not the case in Bangkok. Many factors may affect the price of a tuk tuk. These factors include whether you’re a tourist, the distance, the time of day and even the mood of the driver!

It’s recommended that fares be negotiated before the journey even commences! Most fares will have a minimum cost of around 30 Baht (€0.80) and may increase to 200 Baht (€5.60).

Vehicles: The SPG3 is the most common model of tuk tuk in Bangkok. The taxis started from the knockdown production of the Daihatsu Midget, a three-wheeled and doorless vehicle made by the famous car manufacturer. Although most of the original tuk tuks were imports from Japan, the manufacturing of most now takes place in Thailand.

Fun Fact: The name tuk tuk was derived from the sound the very first engines made! Thankfully, technology has advanced since then and the noise emitted from the vehicles is far quieter than previous models.